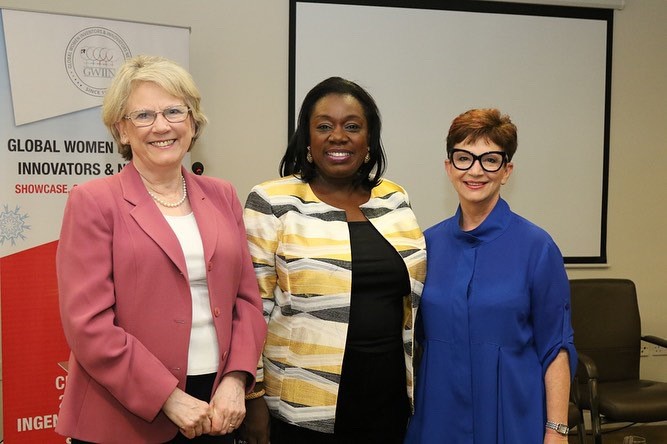 Roz is pictured (left above) with Bola Olabisi ( centre) Founder and CEO of GWIIN and Mandy Haberman (right) Founder of Haberman Products.

Roz told the audience of women who had come from many countries across the world to receive awards and to network with other women inventors, that it was vitally important for them to communicate with the world using social media, and especially Instagram, which is growing fast and increasingly used for business.

In addition they needed to be able to use traditional media and to realise the huge value of the publicity that radio and TV interviews can provide.  That’s why media training is so important for all inventor, innovators and entrepreneurs.

She quoted examples of media engagement by inventor Sir James Dyson and innovator Sir Richard Branson as well as innovator Dame Stephanie Shirley, who always used the name Steve when booking appointments because using a man’s name got her through the door.

GWIIN – the Global Women Innovators and Inventors Network – was founded in 1998 with the aim of recognising women’s contribution to the field of invention and innovation.  Dr Bola Olabisi, GWIIN Founder and CEO, told the conference that 21 years of recognising the achievements of women inventors, innovators and entrepreneurs had helped women across the world to develop their ideas and their business through their networking opportunities, knowledge sharing and awards.

Mandy Haberman, Director and Founder of Haberman Products, and creator of the world famous Anywayup cup for infant feeding, told the conference that they must recognise that as inventors it is often a struggle to get their rights recognised and they must be ready to defend their inventions as she had to do. “There are still too few women inventors – fewer than 10 percent – and we need more women to release their potential” she said.

Amina Al Hawaj, award-winning inventor, and Ambassador of Invention for the Kingdom of Bahrain told the audience that she was proud but also sad to be talking to women inventors in 2019 about her pioneering work as the first woman inventor in Bahrain.  “I am proud to be here, but I am also sad because we need so many more women inventors to realise their potential “ she said.

The conference was chaired by Gaynor Morgan, Award-Winning Inventor and CEO of C & G Medicare Ltd.

Roz has been a longstanding supporter of GWIIN, having spoken at two previous conferences, including one in Reykjavik in Iceland in 2011.

Roz Speaks on Broadcasting and Business

How can we help?